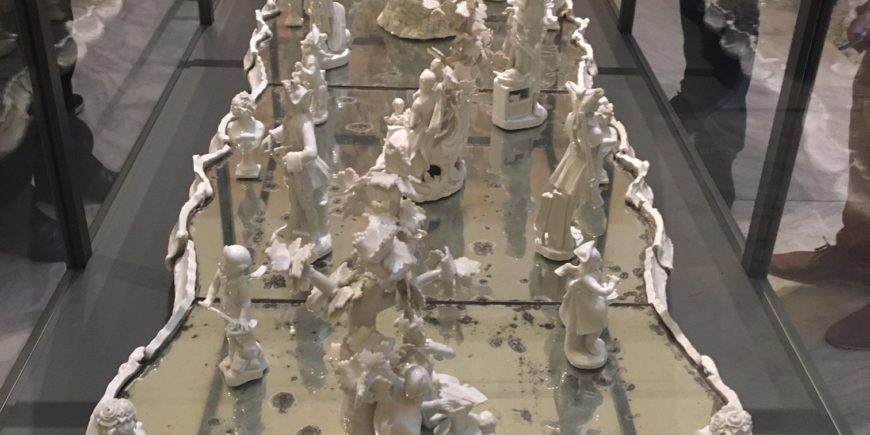 The beautiful city of Vienna, FPS trip in October 2019

From the 9th to the 12th October 2019, fifteen FPS members eager to explore the Austrian treasures of the past, met for a study trip in Vienna. The program was full of enjoyable and rare visits to palaces and their important collections with some special porcelain finds. 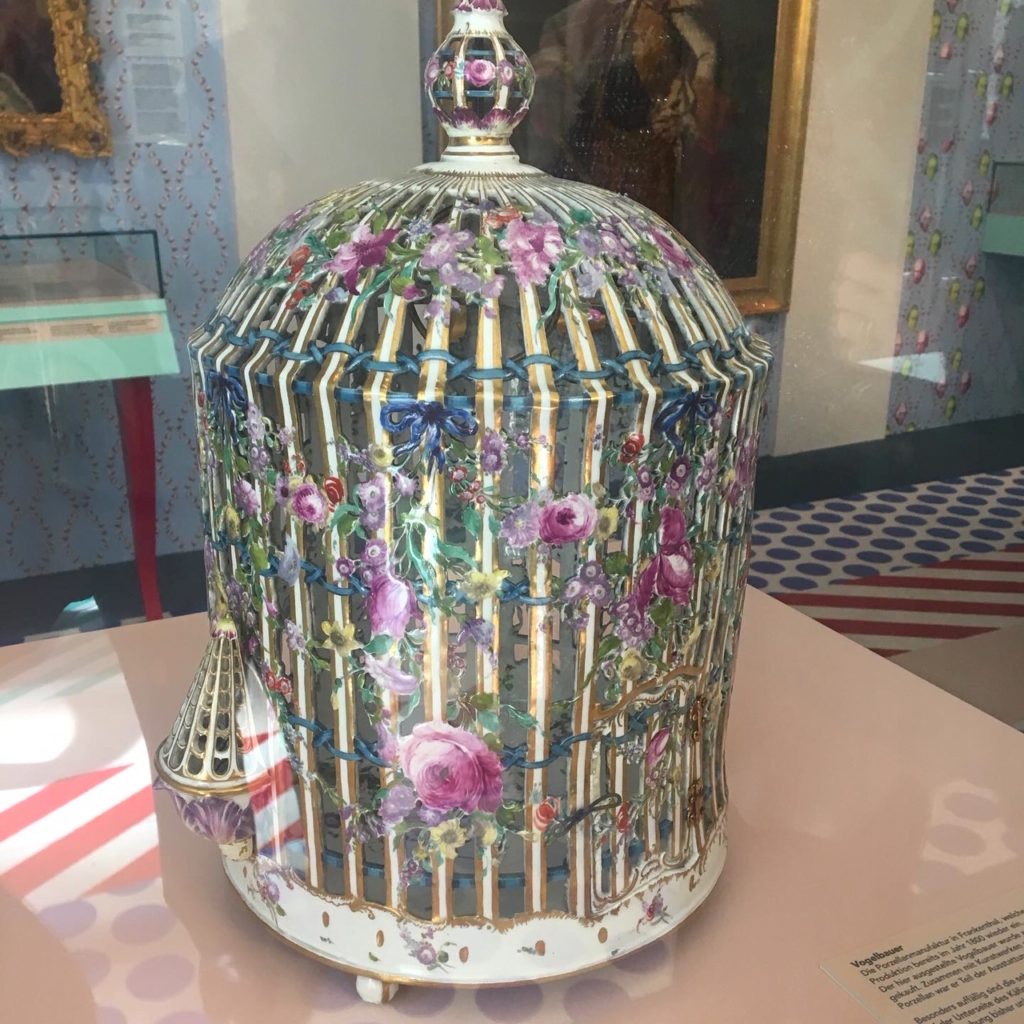 We started on Wednesday morning with a collective drive to Eisenstadt, Burgenland for a private tour of Schloss Esterházy and its porcelain store. Constructed in the late thirteenth century, it came under the ownership of the powerful Hungarian Esterházy family in 1622. The estate was then converted into a baroque castle but still remained the main residence and centre of administration of the family for over 300 years. We had the privilege thanks to Dr. Florian Bayer to discover some special pieces by Meissen, Du Paquier and Sèvres. As we were quite a small group, we had the chance to look at all the pieces we wanted, which culminated in an interesting dialogue about the colours, shapes and the manufacturers. Amongst many, we came across a magnificent pair of Japanese Kakiemon parrots, ca. 1680, a petite set of four fan-shaped Du Paquier chinoiserie porcelain dishes, ca. 1735, and a magnificent pair of Sèvres salad bowls, ca. 1812, made in gold and neo-classical style for Count Schwartzenberg. After the porcelain store we toured the palace with its unique and marvellous collection of porcelain, antiques and art. 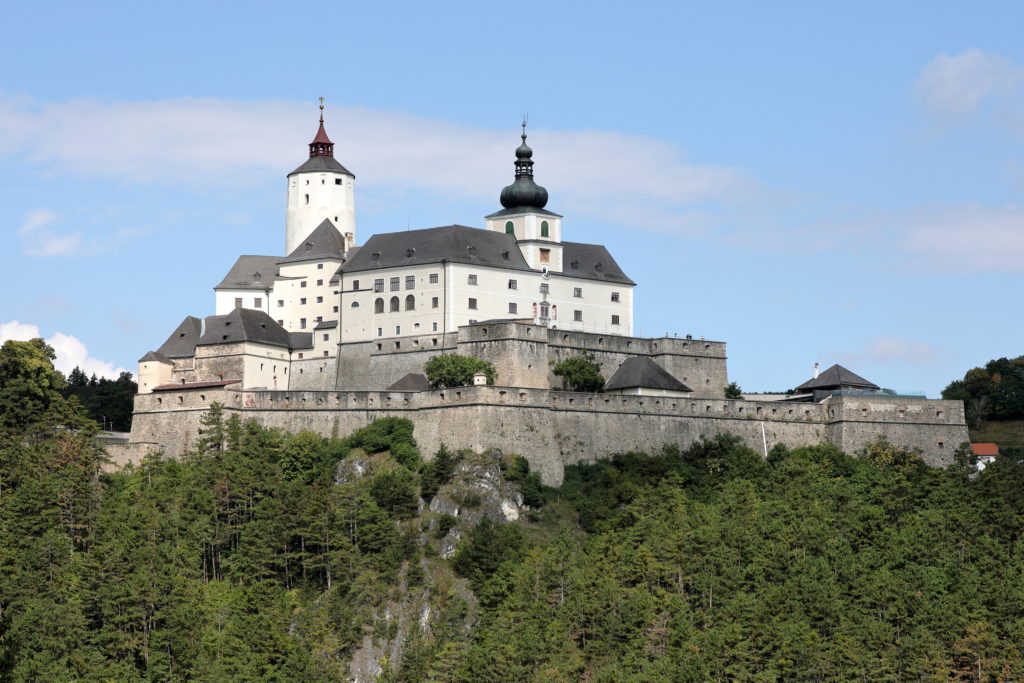 Afterwards, we had a typical Wiener Schnitzel lunch at Haydnbräu (Joseph Haydn was born in Eisenstadt). Our tour leaders then managed to get a surprise visit to the overwhelming Burg Forchtenstein, built in the early Middle Ages. It was in the ownership of the House of Habsburg when it was given by the Emperor to Count Nickolas Esterhazy and thoroughly renovated and extended. It contained a fascinating family full size portrait collection and the famed “Treasure Vault” which we were very lucky to visit. It was like a large Wunderkammer and has remained intact since the late 17th century. 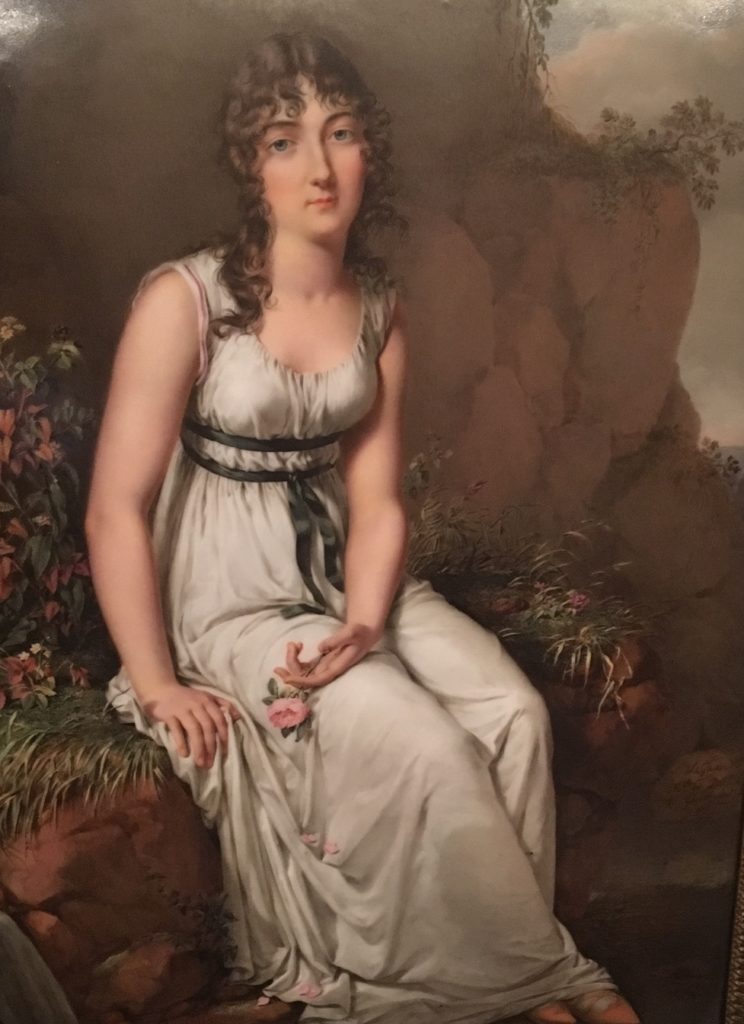 We then headed back to Vienna for a private visit to Geymüllerschlössel in Pötzleinsdorf, a private residence that has now opened as a museum, exhibiting some exquisite porcelain and applied arts in its original Biedermeier interior. This must have been by far the most incredible house I have ever visited. The wall paintings, wallpapers, floors and ceilings were all beautiful, the furniture was stunning and the rooms were so beautifully presented in every detail. The day ended with an early supper at a “Heurigen” local Austrian dining place with homemade food and local wines. A perfect end to our first day. 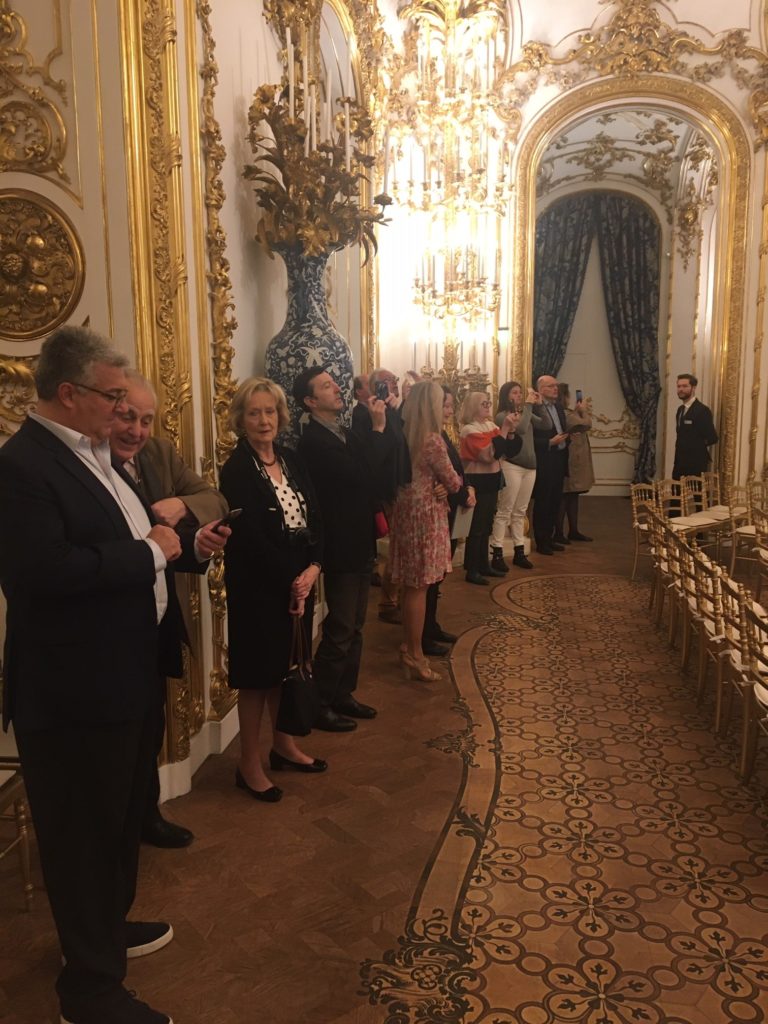 On Thursday morning we all met at Stadtpalais Liechtenstein, one of the private town palaces belonging to the princely family of Lichtenstein, which was just breathtaking. It was built from 1692 to 1705 by the Italian architect Domenico Martinelli and the Swiss architect Gabriele Grablieli. The magnificent ensemble of Baroque stucco ceilings, opulent Neo-Rococo interiors and original furnishing complemented by Michael Thonet’s fine parquet flooring, form a harmonious whole. The palace has been renovated for almost five years and is now shining to its full original glory. The visit started by going up this incredible stairway where everything was pure white and bright, filled with sculptures, and a beautiful ceiling. The tour then continued to the ball room and adjacent rooms which could not be more Rococo. It was all breathtaking, the gilding on the ceilings and walls, the matching silk curtains and wallpapers, were outstanding. There was a huge chandelier in the middle of the room and the walls were complemented with large important Chinese vases and early European bronzes. Everyone’s eyes where shining to see so much splendour. We also saw some very nice and important pieces of early European porcelain, which were mainly Meissen. 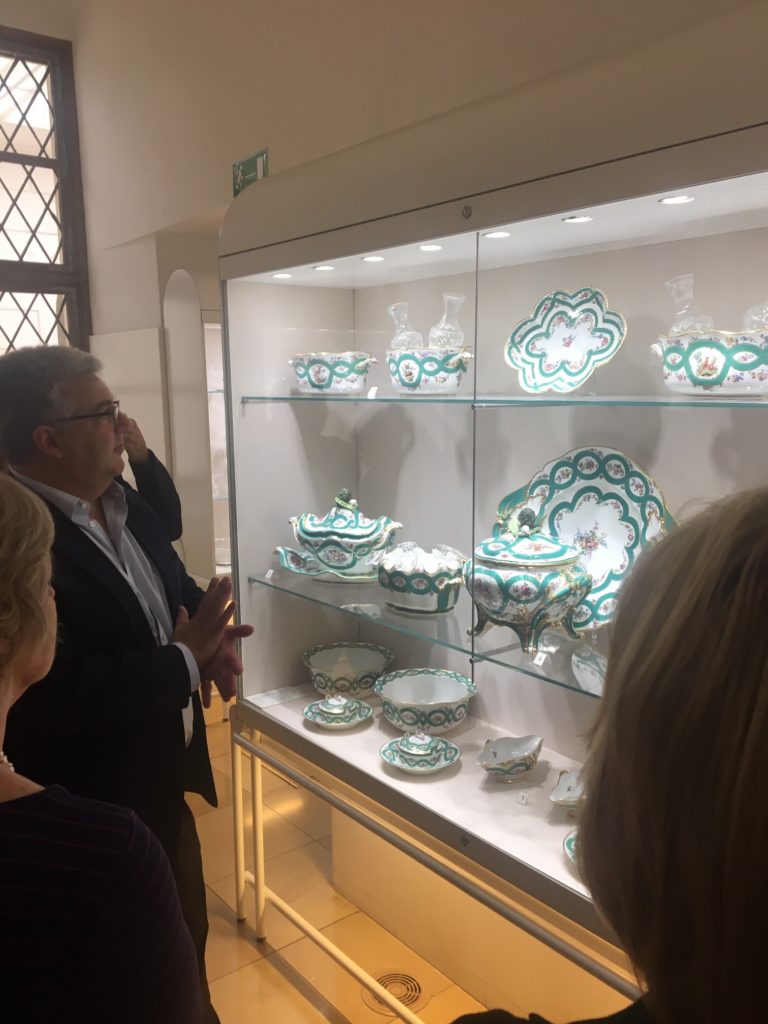 We then continued onto the former Imperial Palace Hofburg to visit its Imperial Porcelain and Silver collection in the ”Silberkammer”. Amongst the large collection, we viewed important Sèvres pieces from the “Green Bands” service gifted to Empress Maria Theresa from King Louis XV and also parts of the 500 piece “Apple Green” service brought to Vienna in 1777. There were also important pieces from Meissen and The Vienna Porcelain Manufactory (The Gold service 1814). The silver collection was immense and really displayed the importance of the Habsburgs and the Austrian-Hungarian Empire. Around 7000 items are on display. 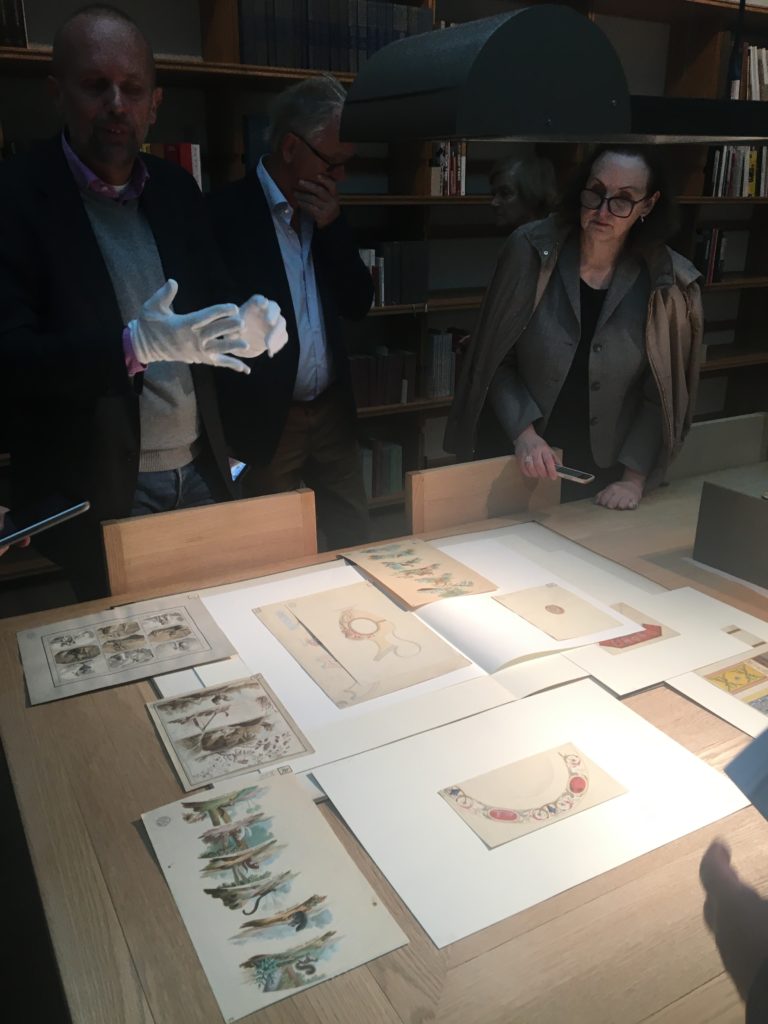 In the afternoon, we had a visit to the Museum für Angewandte Kunst (MAK) for amongst others a private viewing and talk at the “Du Paquier Dubski-room” under the guidance of Dr. Rainald Franz. It was incredible to see this room filled with fine porcelain pieces everywhere, including furniture inlays, wall and door decorations. We then had the chance to visit the library archives to look at the original sketches made for some of the Vienna State factory under Conrad von Sorgenthal. It was a real privilege to have a look at all of those fabulous designs and their artwork. In the evening we enjoyed a fabulous dinner at the MAK restaurant. 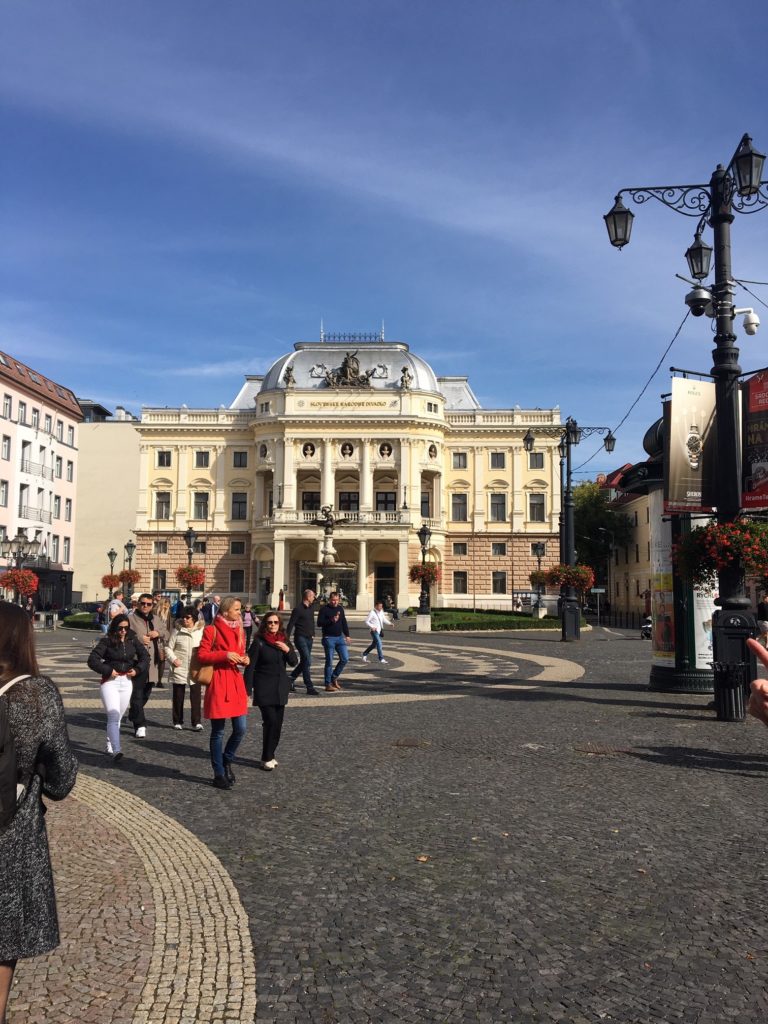 On Friday we made a cultural trip by train to Bratislava (Pressburg), the capital of the Kingdom of Hungary under the rule of Maria Theresia mainly to see the Bratislava Castle. A very impressive building, rebuilt in the latter part of the 20th century after a final total destruction in the Napoleonic Wars. We then visited the Archeological Museum housed in the basement and an exhibition of prints depicting the history of Bratislava. It was obvious that decades of modern foreign rule had had its impact on the country’s treasures which must have been removed. We later enjoyed a stroll through the old town of Bratislava including a stop for a “Hot Chocolate” at the “Konditorei Kormuth” (for those who got a seat). The evening was free to digest the visits and impressions of the sheer volume of tours we had completed in three days. 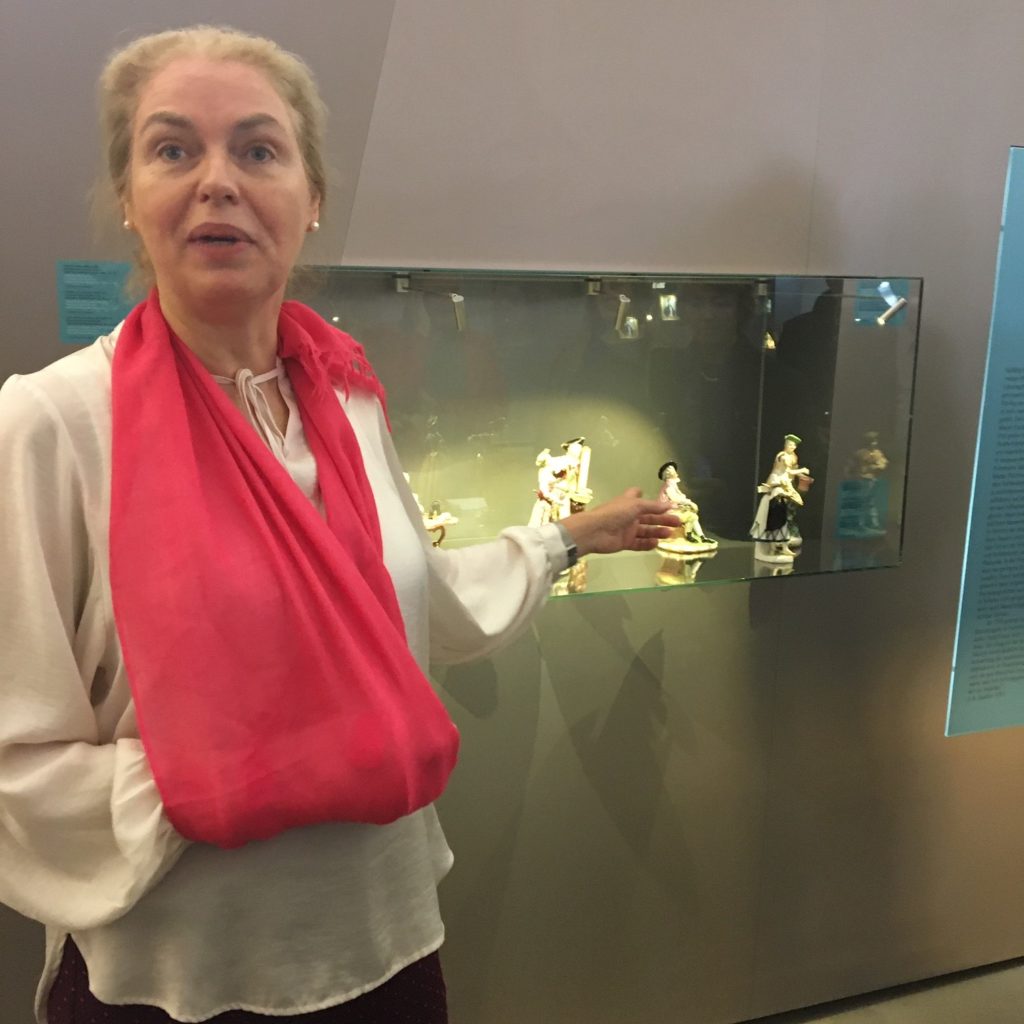 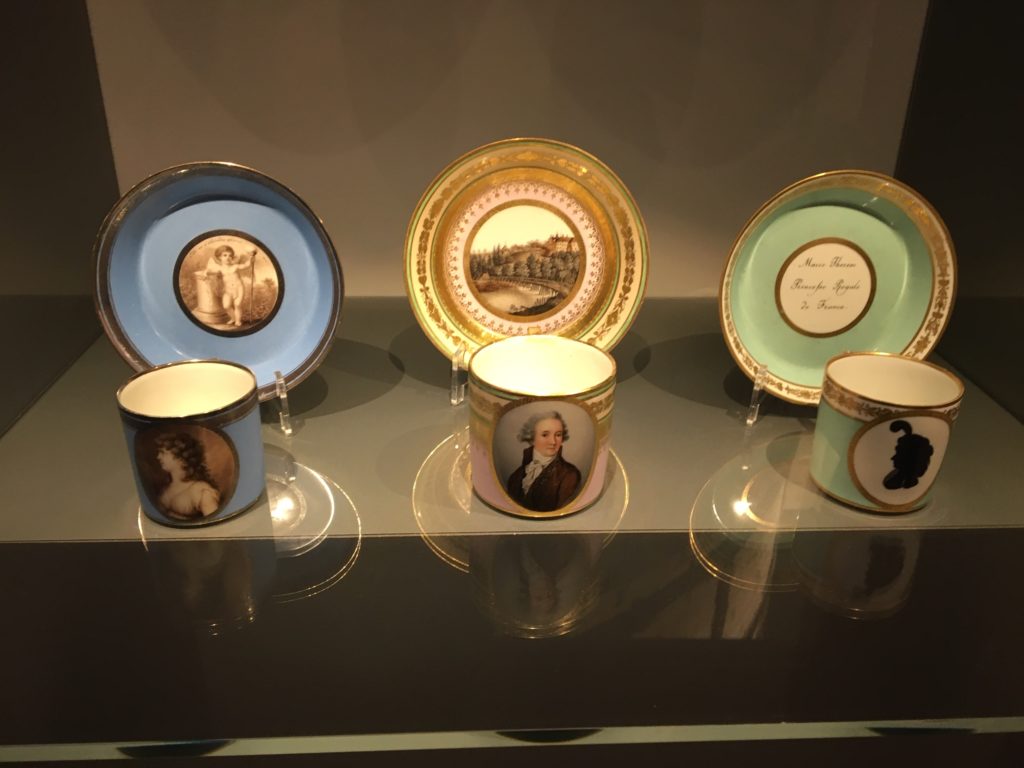 Saturday morning was dedicated to a visit to the Augarten Palace and its Porcelain Exhibition. We met for a brief breakfast before embarking on an amazing tour guided by the one and only Claudia Lehner-Jobst (even just after she had undergone a hand operation). It was very interesting to see major porcelain pieces from the development of the Vienna Porcelain Manufactory starting with Du Paquier in 1718 through the Imperial periods to its closure and reopening in 1923 as Augarten. Especially the early pieces were exquisite in their modelling and colours. This visit was the final part of an incredible tour of European culture, art and its related history during the Habsburg Area. A great thanks to the organisers for everything that they had done to make this such a memorable journey through history.