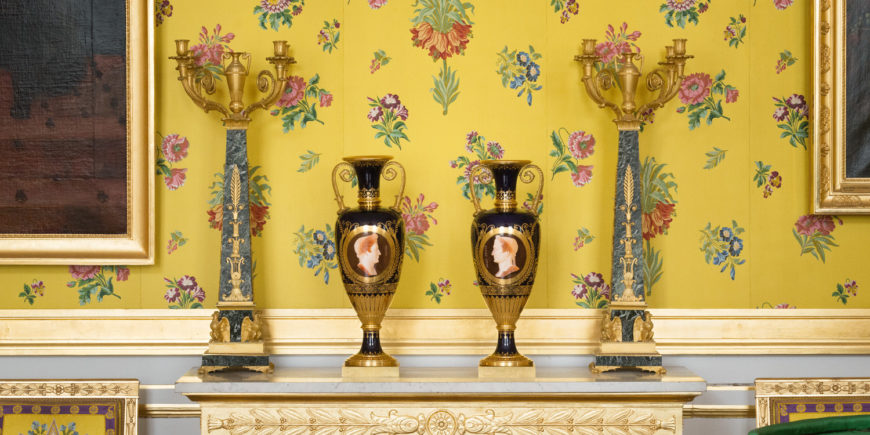 We are honoured to welcome Camille Leprince, antique dealer specialised in fine European ceramics as well as author and lecturer on the subject. On this occasion, Camille will mark the 200th anniversary of Napoleon’s death in 1821 with an analysis of the production at the Sèvres manufactory during the Premier Empire. We hope you can join us!

Living Room Lecture: NAPOLEON & SÈVRES. THE ART OF PORCELAIN AT THE SERVICE OF EMPIRE – Camille Leprince

NAPOLEON & SÈVRES. THE ART OF PORCELAIN AT THE SERVICE OF EMPIRE

2021 celebrates the bicentenary of Napoleon’s death, an anniversary that seems to have been more plublicised than his death in 1821!

This lecture is based on my book ‘Napoléon & Sèvres. L’art de la porcelain au service de l’Empire’ published on the occasion of the exhibition ‘Impérial & Royal. L’âge d’or de la manufacture de Sèvres’ held at Galerie Aveline, in Paris in September 2016. Dedicated to Sèvres Neoclassical porcelain, the exhibition was a collaboration with the Musée Napoléon Ier at the château de Fontainebleau and its chief curator Christophe Beyeler to whom I am grateful.

After the appointment of Alexandre Brongniart as new director in 1800, the Sèvres manufactory regained the splendour lost in the aftermath of the Revolution. The former royal manufactory became the imperial manufactory of porcelain, responsible for supplying the Maison de l’Empereur (the Emperor’s household) with wares and vases that furnished the imperial palaces, dressed the Emperor’s tables and were offered as diplomatic gifts.

Napoleon I, appointed empereur des français in 1804, lavishly used the resources of the Sèvres porcelain manufactory as a means to establish his own power and to secure the new dynasty, the House of Bonaparte. In this light, this lecture aims to demonstrate that Napoleon I was the most depicted French sovereign on Sèvres porcelain, and reveals how the Emperor used porcelain as propaganda.

Image: Pair of vases fuseau painted in cameo style with portraits of Roman Emperors Auguste and Caesar. Initially ordered by Napoleon I for the Imperial palace of Monte Cavallo, Rome, Italy. Sèvres, c. 1811–14.