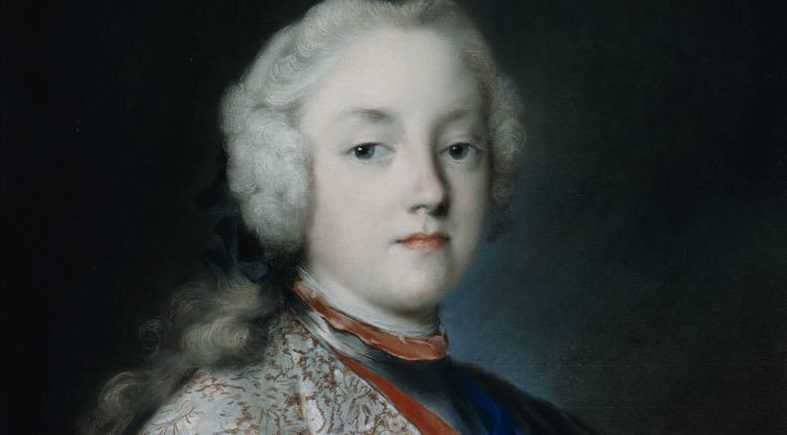 The French Porcelain Society continues its series of weekly online lectures with Maureen Cassidy-Geiger on the incredible two-year Grand Tour of the Elector Friedrich Christian of Saxony in the mid-eighteenth century. We hope you can join us!

THE GRANDEST OF TOURS: FRAGILE DIPLOMACY MEETS THE GRAND CURE

Elector Friedrich Christian of Saxony (1722–1763), who succeeded King August III in 1763 for just 74 days, was afflicted from birth with profound physical disabilities which prevented him from standing or walking without assistance and made simple tasks like eating and dressing difficult. The marriage of his sister Maria Amalia to the King of Naples in 1738 inspired their parents to send the fifteen-year-old heir to the throne on an impromptu journey to Italy for life-saving medical treatments. This exceptional two-year adventure was amply documented, allowing us to precisely reconstruct the prince’s route and daily experiences as he travelled from Dresden to Naples, Rome, Florence, Milan and Venice along pilgrimage routes and post roads, returning via his mother’s court capital, Vienna. Like the able-bodied Grand Tourists he met along the way, he also travelled incognito (“Comte de Lusace”) with an entourage, enjoyed celebrity status, and collected art, relics, books and souvenirs for shipment home, many of them gifts from his hosts along the way. A selection was featured together with archival documentation in The Grand Cure / Die Grande Kur 1738–1740 (Staatliche Kunstsammlungen Dresden, 2018). In return, wagonloads of porcelain from the Royal Porcelain Manufactory at Meissen were shipped abroad to serve as thank yous from King August III and to celebrate the Naming Day of dowager Empress Wilhelmine Amalie, the prince’s grandmother. Many of these porcelain gifts have survived and were showcased in the exhibition and catalogue Fragile Diplomacy: Meissen Porcelain for European Courts, ca. 1710–63 (YUP/BGC, New York, 2007-2008). Some were customized with coats of arms or apt painterly compositions, a few items were repurposed from Japanese Palace stock, and others were simply on hand and included in the shipments; the Meissen porcelain table service that accompanied the prince across Italy was understandably damaged and depleted from use at the lunches and dinners he routinely hosted so a replacement was sent via courier to meet him in Vienna, together with a selection of the king’s silver plate.

Maureen Cassidy-Geiger has twice driven the prince’s itinerary and has researched his sojourns in Naples, Rome, Venice and Vienna on various residential fellowships. Transcriptions of the travel diaries, composed mostly in French, and related research and documentation are posted on the website comtedelusace.wordpress.com.

We are delighted to welcome Dr Juliet Carey, Senior Curator at Waddesdon Manor, who will …