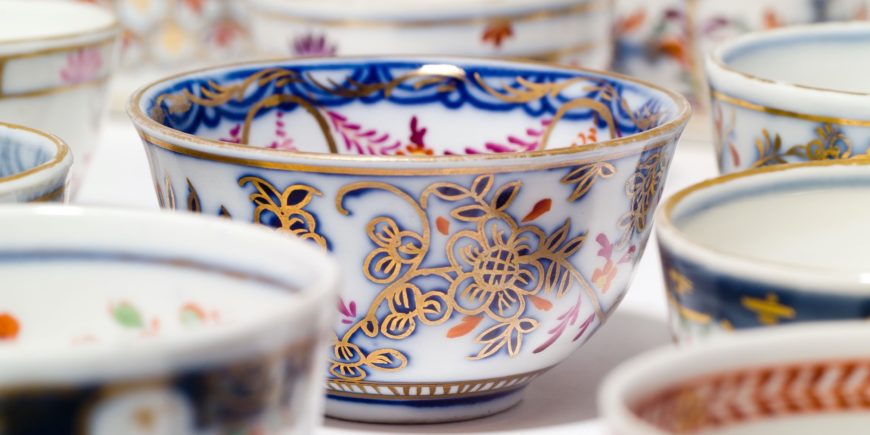 What’s in a name? The Trouble with Türkenbecher & European Trade Ceramics

The discovery of how to make hard-paste porcelain in Europe not only revolutionized the way in which hot drinks were consumed there but also elsewhere. By the 1730s the manufactory at Meißen, and subsequently many others across German-speaking Europe, were supplying cups to customers in the Near and Middle East. These cups were —and still are— known Türkenbecher or Türkenkoppchen (Turks’ Cups). In English, it has to be expanded: ‘Coffee Cups for the Turkish Market’, which smothers all of the potency of the original German. These cups have repeatedly come to mind given the Black Lives Matter campaign and pressure to decolonialize museum collections.

[Editor: Decolonizing museum collections is in part about reflecting on the diversity and the voices of the people within their collections and around them.]

Turks’ Cups were decorated porcelain drinking cups made for export to the Ottoman Empire, although evidence shows that they were also used in North Africa, and there was a market in Europe too.

What made a cup a Turks’ Cup? What marked them out as being, as one author wrote, “for the Mohammedans”? Shape is the first factor. At Neudeck/Nymphenburg, Turks’ Cups are described as “plain teacups and bowls without handle”. The eschewal of handles was a concession to the European belief, expressed by the intendent at Wallendorf, that “Turks are not in the habit of touching the cup with their hands when drinking coffee, but rather are wont to place said cup in cup [zarf] of gold, silver or copper first”. It was of course more complex than this, and fundamentally related to the fact that tea bowls from China, the Ur–type as it were, themselves had no handles, and which European’s were increasingly leaving behind.

Décor is the second factor. The decorative direction of the first commission at Meißen —24,000 pieces in 1732— was stipulated by Manasses Athanos, the merchant who placed the order. His specifications included marking the bases with a pseudo Chinese mark (later the caduceus) instead of the crossed electoral swords which, it is said, were likely to have been perceived as a Christian symbol. The palette was limited to iron-red, cobalt-blue and gold – the typical colours of the Asian porcelains which preceded them – and these colours were used to decorate them with stars, crescent moons and stylized flowers, the so-called Vogelmuster, and sometimes text, including appeals to Allah. At Kloster Veilsdorf, Türkenkoppchen were the work of apprentices, the ‘slow’ and the aged, suggesting that they were less sophisticated than wares intended for European consumers. They were made in vast numbers; in one year alone, the K. K. Viennese Porzellanmanufaktur sent nearly 200,000 Türkenbecher eastwards. According to Gert Nagel they used once and thrown away (Fayencen, München: Battenberg 1977, 14).

Porcelains made for export are an inescapable element of European expansion, imperial ambitions and the Eurocentric economic order of the 16th, 17th and 18th centuries. Objects like Turks’ Cups should also be scrutinized. Trade ceramics are instrument of power. Consumers were racially and culturally stereotyped by manufactories and merchants. Their preferences and practices were often initially assumed and understood in a broad-brush manner, as with the statement concerning the use of zarfs noted above. There is an argument for seeing the production and export of Turks’ Cups as ‘colonization in the absence of direct colonial administration’ (Li Min, 2013, Asian Perspectives 52/1, 43-74). This approach has been taken by Li Min in her work on Chinese export porcelains in the Philippines before the archipelago was colonised by Spain in the late 16th century. Objects of export and trade are well known instruments of soft diplomacy. Following Li Min’s approach we can go further and see them as giving foreign players and powers a foothold in lands not their own.

Furthermore, it should not be forgotten that some humble modelers and painters certainly shared the racist and xenophobic beliefs better documented among other social strata. In 1867 Sultan Abdul-Aziz (reigned 1861–1876) stopped in Nuremberg on his journey from London to Istanbul. While there he became the subject of ‘comic’ verse. One ditty describes a delegation of Türkenbecher painters to the Sultan. They bemoan a downturn in their business. The author has the Sultan respond, improbably and inappropriately in the same coarse thick language: “now … have a bit of patience / from the bottom of my heart, I say I’m truly happy to help / when I get home, I’ll be dashed / if more cups don’t get smashed”. When I first found this my response was delight—what a perfect anecdote. Today, I realize the poem is deeply problematic. Thought at first appearance jolly and certainly amusing in the painter’s blustering attempts to address the Sultan, the writer’s decision to let the Sultan respond using their words and dialect goes beyond the comedy of Sue Townsend’s 1992 satire The Queen and I (in which Queen Elizabeth II is moved to a council estate). It is tantamount to an open refusal to acknowledge his origin, his person, and his status, as leader of his own empire, however problematic that may itself be.

In 2012, the response to my work on Turks’ Cups was usually that there is almost nothing to say. In 2020, I’d argue exactly the opposite.

Editor: This article was amended on Friday 3 July 2020.

We welcome thought–provoking submissions for inclusion in our Causerie Céramique posts, subject to editorial review, contact FPSEnquiries@gmail.com . The opinions expressed on our website and social media platforms are those of the authors and do not necessarily reflect the opinions of the Committee of The French Porcelain Society.

Image: A selection of so-called Türkenkoppchen from the stores of the Bayerisches Nationalmuseum, Munich. Detail from a 2012 exhibition poster. Photo: Bastian Krack